by Mark Bialczak | 49 days ago

Glenna Wisniewski is a familiar face to many people in the Liverpool community, recognizable when they visit the LPL and when she ventures to points around the village and further spread when she reaches out to represent the library.

The Liverpool Public Library Director will be retiring at the end of July after working here in various librarian positions since 2003.

Wisniewski's deep relationship with the LPL, public libraries in general and the Liverpool community is the topic of this week's community library column for the Eagle News Online/Star Review.

The article and a photograph ran on page A1 of the newspaper, a note to Glenna's significance to the people of Liverpool. 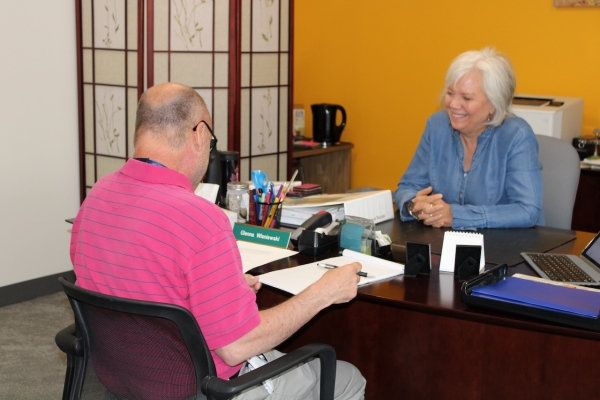 Director Glenna Wisniewski reflects on her career in her library office with Communications Specialist Mark Bialczak.

If you haven't had the chance to read the story there, here it is:

When Glenna Wisniewski was a kid growing up in Baldwinsville, she recalls, on a rainy day she might be found at her friend Jimmy Pirong’s house playing library.

“We would have our books and checkout cards,” she says. “I’d say, ‘I think you need to read this.’ I’d give due dates.”

Yes, she had real-life experience to draw upon. She also remembers riding her bike to the village library, located at the time in a house with creaky floors on Charlotte Street.

Taking a career assessment test years later in high school, one of her choices came out as  bookmobile librarian. Alas, Wisniewski already had it in her mind to study American History at Syracuse University.

Funny how the pages can turn.

That bachelor’s degree led to a Master’s in Archives and Museum Librarianship at SU. Then came her first professional librarian position in the office of Museums and Historic Sites for Onondaga County Parks. Then an out-of-the-blue query letter brought a slot as a children’s librarian at the Onondaga County Public Libraries’ Mundy Branch, which was followed by a beloved slot as a bookmobile librarian out of the central branch of OCPL.

“Ding!,” Wisniewski says with a laugh about that revisit to the bookmobile suggestion of her high school days. “My favorite job, ever!”

While expecting the birth of her daughter, Wisniewski heard of a job at the Liverpool Central School District’s Educational Communication Center, like a BOCES (Board of Cooperative Educational Services) for the big school district. “What a great schedule to be on,” she says she thought at the time.

She ended up working for the school district for 20 years. When her position was cut to half-time in 2003, Wisniewski also became a part-time substitute librarian at the Liverpool Public Library.

“The rest is history,” she says. That history includes becoming full-time at the LPL when her school district position was eliminated in 2009. It winds through the LPL as adult services librarian, coordinator of children, adult and teen services and assistant director before getting  appointed director in 2016.

Wisniewski will retire as LPL Director at the end of July.

She says she has many people to thank.

Professor Antje Lemke at Syracuse University. Elaine Wisowaty and Dennis Connors at Onondaga Parks. Linda Mann, Kay Budmen and Nancy Silverman at the school district. Karen Ingeman and Dorothy Morgan on the library staff and Donald MacLaughlin from the library board of trustees.

“The people that supported me and encouraged me had more faith in me than I had in myself,” Wisniewski says.

She says they and others she’s encountered over the years helped her form the principles that make Glenna, Glenna.

“One, leading and accepting different personalities to the table. The one way I see it is not necessarily the way.  Two, it’s OK to fail and try things. If it doesn’t work, go back, reassess why it doesn’t work, try something else. Three, surround yourself with smart, competent people. Let them know it’s a safe environment, they can do what they need to do safely and they have what they need to succeed,” she said.

Wisniewski says her decades at the Liverpool Public Library have helped her discover much about the community, too.

In the past several years, Wisniewski says, she’s seen the staff help steer patrons through the library renovation, the cyberattack on the OCPL online system and, of course, the pandemic.

“We have a great staff, a great collection and, now, a great building,” she says.

Changes that came from the pandemic such as more online opportunities, virtual programming and the Grab It & Go (holds pick up in the underground garage) have remained.

“I think a lot of people realized how much the library means to them,” Wisniewski says. “We ushered them to online resources that still have high use. We began important community services like passing out COVID tests and having masks available. Being open and maintaining a safe environment went a long way with the public.”

Even after retirement, she says, “I’ll always be an advocate for libraries. An OCPL advocate. A Central New York Library Resources Council advocate. I meet with (county assemblymember) Pam Hunter. As inflation continues to grow, I think people will continue to rely on libraries’ free service. No matter who you are, you’ll be treated the same. Elon Musk or a homeless person. The libraries will be more important to fill their roles in the communities. It will be tough, but we have to give the people what they need.”

And she’ll travel to see family in California and Tennessee, and take advantage of volunteer opportunities.

“I’ll see where the road takes me,” Wisniewski says.

“I never had any intention of being a library director. Like said in a quote (from author Douglas Adams) to the staff:

I may not have gone where I intended to go, but I think I have ended up where I needed to be.

Posted in At the LPL; Tagged LPL Staff;