by Mark Bialczak | 48 days ago

A lot of really bad things could happen if all the power in the world went out at once.

But the memory of all Beatles music apparently being wiped from the collective minds and history of our planet except for one guy who happened to be hit by a bus … No, that that!

Yesterday starts with a quite stretched-out premise, you know it when you see it. Poor local musician Jack Malik is pedaling his way through his melancholy and sinking career when the power goes out and a British bus hits him hard enough to knock out a major tooth and land him in the hospital.

When he comes to, his ever-faithful manager Ellie Appleton is of course at his side. His earnest friends are ready to cheer him up, too. He grabs the new guitar they gifted him and sings a soulful Yesterday.

So goes this fantasy directed by Danny Boyle from the screenplay by Richard Curtis. No stranger to romantic comedy is Curtis, with Notting Hill and Love Actually to his credit. Nor drama is Boyle, with Slumdog Millionaire and Trainspotting to his.

This one plays out as more the former, with just enough conscience-battling by both Jack and Ellie to cover the latter. 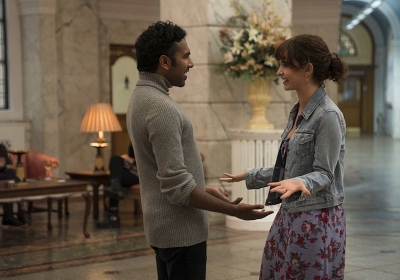 Patel and James are good together in the give-and-take. Interestingly enough, even though he’s the singer in this one, she’s got movie music on her resume as young Donna in Mamma Mia! Here We Go Again.

Anyway, Jack Malik’s proficient enough at recreating the Beatles’ work to impress Ed Sheeran, playing himself, and his manager, a sinister Hollywood type played with a snarl and smirk by Kate McKinnon.

Beatles music will always win. But will Jack come out of this with his Rubber Soul intact?

And is that interesting enough to carry the weight?

For me it was.

Yesterday will be screened as part of the Movie Matinee Series at 1:30 p.m. Tuesday, Dec. 17 and Friday, Dec. 20, in the Carman Community Room. Yesterday is part of the LPL’s DVD collection.