Before Thurgood Marshall could become one of the icons of American culture by righting so many injustices and becoming the first African American Supreme Court Justice, the young attorney had to overcome many prejudices himself.

So we find him as an NAACP nomad in Marshall, leaving his family home in New York City to argue the case for any soul the organization deemed as innocent and worthy of its defense to battle an often crooked system.

In 1940, he’s sent to Bridgeport, Conn., to argue for one Joseph Spell, a driver accused of raping the white woman of the family for which he’s employed.

We meet Marshall getting off the train. He’s a confident man, sure enough, telling co-counsel Sam Friedman to pick up his luggage.

It’s a start to a relationship that begins with the stark differences of black and white, yes, but eases its way into many shades as they work hard to battle the system, the prosecutors, the judge, society’s pressures, and, yes, the defendant himself.

The cast is terrific, starting with Chadwick Boseman, the man on so many minds as a huge superhero tackling Marvel’s Black Panther title role. Boseman’s played real-life heroes, too, portraying baseball barrier buster Jackie Robinson in 42  (and, for Syracuse fans, Orange running back star Floyd Little in The Express before that). Here, he’s just the right man to play the confident and complex Marshall, a guy who knows the deck is stacked against him but thinks he’ll turn the case into a winning hand, every time. 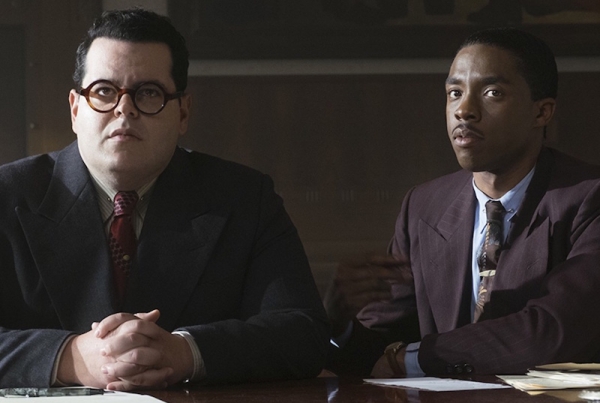 Josh Gad is the right pick to play Friedman, one-half of a two-brother firm who’s made his small niche in insurance cases. The NAACP knows it needs a local attorney to register its stake in the case, so Friedman it is.

Then the judge, played so sternly by James Cromwell, steps in with an unexpected twist of a ruling. Yes, Marshall can stay in his court to also represent Spell. No, Marshall may not utter a single word. He must be a silent partner in court.

To watch the two work this out is quite compelling.

And the others in the mix, most notably Kate Hudson as the perplexing woman doing the accusing and Sterling K. Brown as the man whose life hangs in the balance, add much to the drama, too.

Everybody learns a lot about each other as they await the verdict, and after the decision, too.

'Marshall' is part of the LPL's MediaBank collection.