Home » Blog » Checking in with Grupo Pagan, the Band That Would Have Played in the CCR in April

Checking in with Grupo Pagan, the Band That Would Have Played in the CCR in April

by Mark Bialczak | 29 days ago

It would have been a big and happy concert for Edgar Pagan and his band mates in Grupo Pagan.

Sunday, April 19 was designated as the day the bass player would bring his loyal five pieces of Bill DiCosimo on keyboards, Jose Varona on drums, David Donley on percussion, Adam Fisher on guitar and Rhonda Paduano on vocals to the Carman Community Room to close out our Latin Rhythms Music Series. 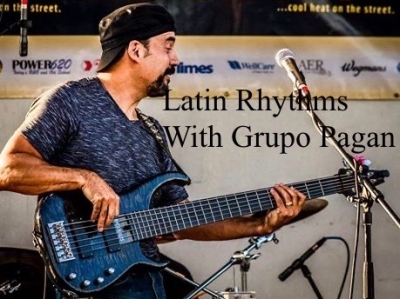 The show did not go on.

"Our message is positive, and we want to energize people," Pagan had told me in a phone conversation beforehand.

But on Monday, March 16, the day after Colleen Kattau and her band Dos XX performed the first-ever socially-distanced set in the CCR, it was announced that because of the threat of COVID-19, the LPL, like so many public places, would be closing its doors to the public until further notice.

The April concert here did not take place for Grupo Pagan. That was the first of many on its schedule. Like people in so many fields, community musicians who play out in public have been hit hard by the ramifications of the virus. New York state regulations still are still keeping many venues from presenting bands.

"The primary focus has been keeping ourselves, family and fans safe and healthy. We've had a few performances but under strict conditions and guidelines," Pagan said.

Pagan says some members of the band "have been working on new music and experimenting with home studios and file sharing. It keeps the creative juices flowing and the chops loose."

And, yes, stay tuned for a video to come from Grupo Pagan. He promises to share it when it's done, and we will, too.

Edgar Pagan shares news about his music world on his Facebook page.