by Fritz's Polka Band and Mark Bialczak | 4 years ago 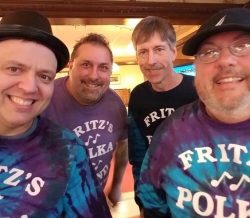 That much you can bank on.

Fritz Scherz has been making me smile with his music and winning ways for decades.

Our connection goes back decades, to the time in the early 1990s when I spotted he, his father Fred and the rest of FPB performing for folks at an outing at Heritage Farm in Madison County. I was covering the music scene for The Post-Standard back then, so I set up a meeting at Fred’s house out in Verona. Of course Fritz showed up, too. They were so close. After all, Fred had started their band decades prior, when his son had not yet reached 10 years old. We all talked and talked, and my ensuing story told of their family and friends and fans, which so often all blended together into one big, happy unit.

I wrote about them more and talked with them when Fritz gave me a call about newsworthy things. They played at Woodstock 99 at the former Air Force base in nearby Rome, on the Welcoming Stage. My, how that made them proud.

Our conversations were never a one-way street. Fritz always asked about my life, too.

Out came the fact that my dad was a drummer in a band down on Long Island when I was growing up, and they sure did play a lot of polkas during their weekend warrior work at wedding receptions.

When a new FPB CD came out, one of the songs was titled “Bialczak’s Polka.” Fritz had written the instrumental after hearing my family story. I mailed a copy of the CD down to my dad. It sure made him smile, I could tell in his voice over the phone, as I reported to the Scherzes . They were able to tell me in 2006 that the song had won best polka song in the Just Plain Folks Awards.

Fred fell ill with cancer and passed away in 2009 at the age of 79. Fritz knew he had to keep the band going in his dad’s honor. And the next year, Fritz’s Polka Band was chosen for induction into the Syracuse Area Music Awards Hall of Fame.

Fritz chose me to give the induction speech for the band at the Sammys Hall of Fame ceremony.

I felt so incredibly honored, thanking them for all of the joy they had given to so many Central New Yorkers for so many years.

So expect more of that spreading of good cheer at 2 p.m. Sunday as Fritz on accordion and vocals, his brother-in-law Gabe Vacaro on bass and vocals, Frank Nelson on guitar and vocals and Mike Faraino on drums fill the CCR with polkas and rock and very happy music.

The series is made possible by a grant secured by Senator John A. DeFrancisco and presented with the Liverpool Is the Place committee.

Here's a YouTube video captured by Steve Pallone of Fritz's Polka Band performing "Havin' Fun" in The Post-Standard studio in 2010.

Here's a YouTube clip of "Bialczak's Polka."Here's a YouTube clip I captured of The Cadley's performing "Someday Soon" in the first installment of the Fall Music Series on Sept. 9.The Fall Concert Series: From Bluegrass to Polka to Holiday Favorites will continue at 2 p.m. Sunday, Nov. 18, with the improvisational work of The New Leaf Ensemble and conclude at 2 p.m. Sunday, Dec. 9, with a holiday show by The Onyx Clarinet Quartet.