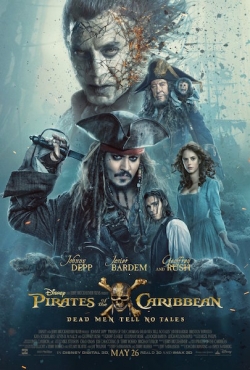 This one is tagged Dead Men Tell No Tales, and what a whopper of a lie that is.

Directed by Joachim Ronning and Espen Sandberg from the screenplay by Jeff Nathanson, this fifth installment of the march that began in 2003 with The Curse of the Black Pearl is a long and winding skirmish between Captain Jack, his crew, which has picked up a non-witch astronomer and big-eyed son of the hero from the original trilogy, old Cap Barbossa and all of his minions, and undead but decidedly creepy Captain Armando Salazar and his also killed but still walking crew.

They’re all after the trident, which will undo all sea curses.

The dead guys will hardly shut up.

No wonder the story takes 2 hours and 9 minutes to tell.

OK, some of it entertains, such as the bank-robbery caper to start the ball rolling, and the goo-goo eyed attraction between the young-and-don’t-know-what-love-is characters played pretty well by Brenton Thwaites and Kaya Scodelario.

Some of it is tedious, though, especially the dark parts at sea as they battle each other to be the first ones to discover the elusive and magical trident.

Great plots can be hard to come by when you arrive at part five, right?

At least Depp’s Sparrow remains ahoy-there eccentric enough to remain entertaining at most times, and the frenzied ending unwinds with enough panache to set the stage for the ruby-red bow that ties it all together.

'Pirates of the Caribbean: Dead Men Tell No Tales' is part of the LPL MediaBank collection.