by Mark Bialczak | 9 months ago 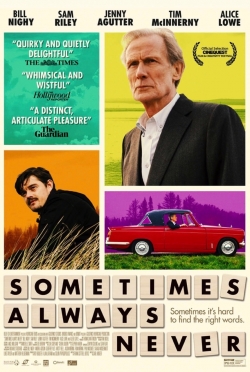 One night over a family table word game, one of his two sons turned from an argument over the legality of the arranged tiles, fled the scene, and never came back.

The continued absence drove a wedge between father and the other son as time wound on and wounds refused to heal.

When we meet Alan and present son Peter in this British film Sometimes, Always, Never directed by Carl Hunter from a screenplay by Frank Cottrell Boyce, they've come together for a car trip to see if a found body is that of Michael's.

Father connives to make it an overnighter.

Together they slowly but surely unload the family eccentricities, baggage and love of Scrabble – no, make that Scrobble or Screbble or whatever cheaper knockoff they played together, a version where Peter clearly remembers having to press the cardboard letters out from a large sheet before they could pursue their quest for word dominance.

Alan admits that yes, many things they owned were of the sub-standard variety. But does he not get some slack for raising the kids himself after their mother died?

And so they return to Peter's house to meet his wife Sue and teenage son Jack, relieved that it was not Michael in that morgue.

Alan talks his way into an awkward stay.

It's all cleverly, oddly, warmly, embracingly fascinating as the father and son dodge and weave from their similarities and differences and the divide caused by that tumultuous day. 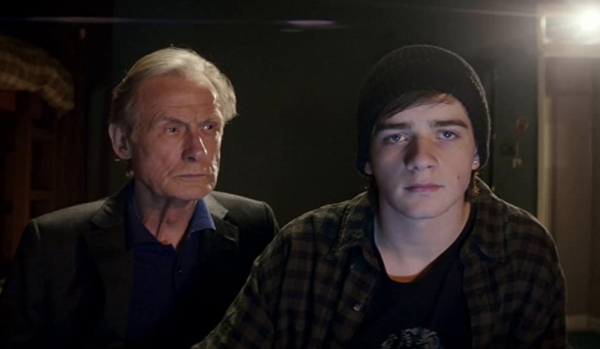 Grandpa and grandson find something, somewhere. (Photos from IMDb.com)

That helps generations up and down to forge onward.

Veteran actor Bill Nighy makes the whole thing tick with his wonderful work as Alan, and Sam Riley and Louis Healey were good choices as the next two generations to take on his traits.

This hidden gem was released in 2018, but did not make its way to release to general VOD  here until this month. LPL cardholders can find it on Hoopla Digital.