by Mark Bialczak | 6 months ago

A true lover of his chosen style will ring the piano keys in the Carman Community Room.

Blumenau has been playing piano since he started taking lessons from his grandmother before he turned 5. Before he was out of school, he fell for certain sound. It still tickles him.

“I’m fascinated by it. In ninth grade, my first style that I learned was Dixieland,” Blumenau said in a phone interview. “Fats Waller. That was unusual. It’s fun music. I’ve tried to move on, but it stays with me. Most of the guys who played stride have died, so I have to play more.” 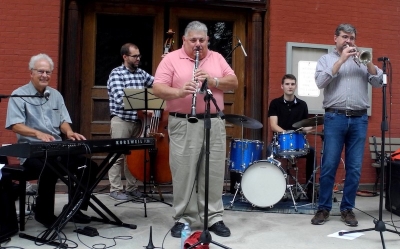 The theme of the show will be Jazz from the Prohibition Era.

The project is made possible with funds from the Decentralization Program, a regrant program of the New York State Council of the Arts. Russ Tarby of the Liverpool Is the Place committee works with the LPL to program the series.

Here’s a video from the Andrew Carroll concert on Nov. 17.

The next LPL music series will be titled Latin Rhythms from Samba to Santana. The concerts will feature LuBossa! On Jan. 19, 2020; Laranja on Feb. 16; Sally Ramirez on March 15; and Grupo Pagan on April 19. All shows will be at 2 p.m. on a Sunday in the Carman Community Room.