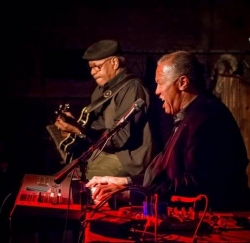 Ronnie Leigh will sing in the LPL’s Carman Community Room in the second installment of the latest library music series, and that has the veteran Central New York performer excited.

I can tell by his voice on the phone when I call to talk to him about his 2 p.m. Sunday, Feb. 18 concert, which will pair him with fellow community music veteran Marcus Curry on guitar.

I can picture Leigh smiling as he tells me, “I’m doing well. Wait. I’m actually doing better than anybody.”

Yes, I’ve seen that smile on Leigh’s face so many times over the years, on so many stages, in so many rooms. He’s comfortable carrying the mood with his voice ready for jazz and more.

I remember when I invited him into the studio back when I was working for the big daily, and he contributed the marvelous an a cappella version of the standard “Centerpiece” for my “Music Notes” local music video series for the big daily’s website. 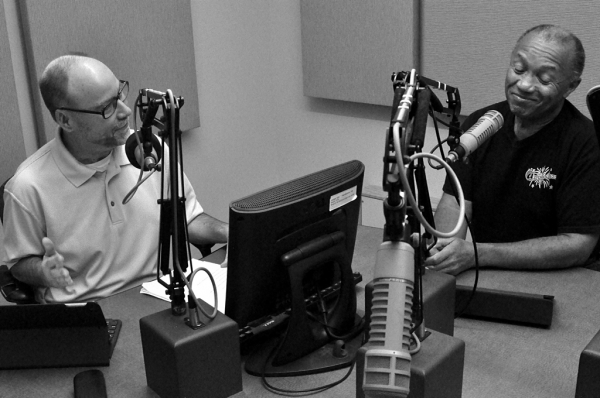 Ronnie Leigh, right, and me in the WAER studio. (Photo by Tom Honan)

I recall him talking about his relationship with Frank Sinatra’s music for my podcast with community radio station WAER, complete with his snippets of The Chairman of the Board’s familiar runs built right in.

That makes me smile, thinking of the great stuff I’ll see when he and Curry play together. I’ll pass more along afterward, on our social media and here, too, if you’re not one of the lucky ones that will fill the CCR.

Leigh says patrons will hear “songs that I think they’re familiar with. Some Miles Davis. Horace Silver. Al Jarreau. I’ll take some tunes that might have been pop songs and do them in jazz styles."

Go back to 2007 to experience Ronnie Leigh sing Van Morrison's 'Moondance,' from YouTube.

The concerts are presented with The Liverpool Is the Place Committee and made possible through a grant from the CNY Arts Council.

The final two shows of the Winter Music Series Origins of Jazz III The Jazz Singer will feature Julie Falatico with Rick Montalbano on piano on Sunday, March 18, and Kirsten Tegtmeyer with E.S.P.  on Sunday, April 15. The events are free.