Home » Blog » Take a Wild Ride with ‘Jumanji, Welcome to the Jungle’

Take a Wild Ride with ‘Jumanji, Welcome to the Jungle’

by Mark Bialczak | 16 months ago 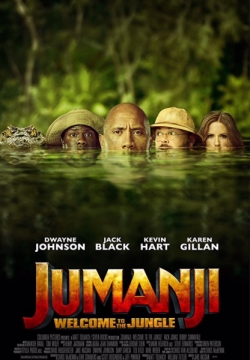 Transformation is the name of the game in Jumanji: Welcome to the Jungle.

Four high schoolers of extremely different social strata are tossed into a detention session closet and told to remove staples from a magazine project or something as ludicrous. If they don’t finish, they’ll have to return on Saturday. I don’t believe it. Musky closets? Saturday days? Ripping off The Breakfast Club‘s detention theme so brazenly?

Anyway, they discover an old AV-squad TV hooked up to an equally ancient video game console. Of course they choose to play it, this football player, nerd, mean girl and super scholastic instead of continuing onward with the principal’s project.

And so they are quite sucked into Jumanji: Welcome to the Jungle.

Once inside this video game, the teens discover they have become different characters: Dwayne Johnson, Kevin Hart, Jack Black and Karen Gillan. Yeah, the mean girl has become a male character in the game. (Somehow, the actor Jack Black seems to have morphed himself into Jason Alexander in his Seinfeld days, but that’s another trick.) Off they go on adventures, needing to solve the game’s mystery to return back to their real lives.

One minute shy of two hours, this sequel to the 1995 original is billed as an action-comedy.

Directed by Jake Kasdan from a screenplay by Chris McKenna, Erik Sommers, Jeff Pinkner and Scott Rosenberg, really it doesn’t have many yucks or big thrills. OK, it’s sort of humorous to see Johnson take on a bit of the fright of the teen nerd from which he sprang, Hart throw a fit to find he’s half the size of the football guy nicknamed the Fridge, stuck up mean girl steam about her dweeby male persona and bookish loner marvel at her beauty queen traits. And the bad guy played by Bobby Cannavale and his gang have an action-packed trick or two up this sleeve to thwart the heroic four.

Yet the best part of this movie is soft side, when they find a pilot played so well by Nick Jonas, and all must learn to play nice together to get what they all want and need – in the game and real life, too

‘Jumanji, Welcome to the Jungle’ is part of the LPL’s MediaBank collection.