The Return of Pooh Opens Everybody's Eyes in 'Christopher Robin'

by Mark Bialczak | 13 months ago 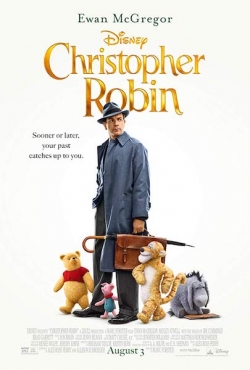 Imagine, if you will, a grown-up Christopher Robin ear-deep in a dilemma.

He lives in London with a wife and daughter.

He’s in charge of the family luggage company. That takes so much of his time, the family feels distant.

Financial times are hard. He’s told that unless he saves the day by working even harder to find some magical solution, people will lose their jobs.

Yes, this is a dark scene.

Enter the special bear from his childhood.

Christopher Robin is an odd film indeed, bringing Winnie the Pooh and the gang from Hundred Acre Wood not only to life, but to London. And back.

Directed by Marc Foster from the screenplay by Alex Ross Perry, Tom McCarthy and Allison Schroeder, this tale throws the A.A. Milne-inspiration into the big Disney honey pot and comes out with a curious mix.

Can they all just get along once the man’s big secret is out of the bag?

Yes, his 9-year-old daughter Madeline too sees the stuffed animals come to life. Then so does his wife. And the bad boss and other good folks at the luggage factory as they move in concert to drive home some good lessons and make the ending a happy one for all.

The animals among the people are true to the personalities they’ve kept in Milne’s pages all these decades, yes. The voices of Jim Cummings, Brad Garrett, Nick Mohammed, Toby Jones, Peter Capaldi, Sophie Ijibedi and Sara Sheen bring them a long way.