We all won because these 'Hidden Figures' reached for the stars 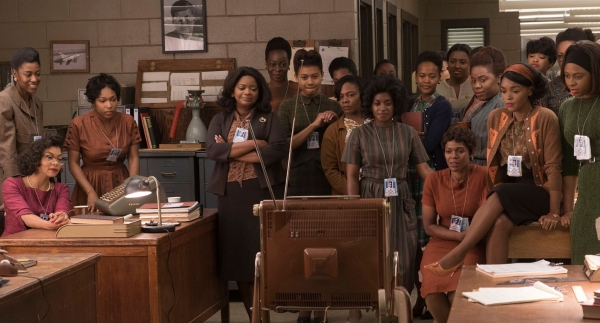 The nation was full of hope and fears in so many ways back in 1961 when these folks at NASA were busting butt to keep up with the Russians, a President on small screens seen by huge groups voicing dreams and concerns as fragmented groups wondered if they could come together to accomplish this greater good.

Director and co-writer Theodore Melfi caught that mood perfectly Hidden Figures. And the work of Taraji P. Henson, Ocatavia Spencer and Janelle Monáe as the trio of African American women who taught the ranks at NASA their true worth and helped get astronaut John Glenn up and around our Earth truly makes this movie something to celebrate as we move into a new year and the start of a new presidential regime. Melfi’s script, with co-writer Allison Schroeder based on the book by Margot Lee Shetterly, takes us on an important history lesson as entertaining and uplifting as it is informative and sobering.

Katherine G. Johnson, Dorothy Vaughan and Mary Jackson are three workers in the “western colored computing wing” of NASA when we meet them with their car broke down on the side of a near-Langley, Va., road. A burly white state police trooper susses out their touch of fear, confidence and pride in place of employment and mission, then offers them an escort to get them their pronto to join in the race to space. Monáe’s Jackson gets behind of their jump-started car and thrills at the real-life chance to chase a trooper down the road.

So it rolls in the 2-hour, 7-minute world Melfi (who also wrote and directed the pleasingly eccentric. St. Vincent) constructs in big and bold scenes using large and small messages.

For instance: The women in the computers wing had to use their segregated bathroom, a significant philosophical bridge but small physical bridge in that building. But when Henson’s Johnson is transferred to the main space center, where there’s no colored women’s room, she must scoot the half-mile back to the old building each time she’s in need. This trip is turned into a huge message when accompanied by the big song by Pharrell Runnin’. Her smug white co-workers, led by a tight guy played in a few-arrogant-words-are-the-best performance by Jim Parsons, also silently place a tiny coffee pot out next to their big one for her use only. When the big boss, played pleasingly by a shirt-sleeved, almost-all-business Kevin Costner, finally addresses her too-long pee breaks, she breaks loose from the indignities at last. After really hearing of her indignities, finally, the boss marches over to the colored wing and demolishes the bathroom sign and the notion of segregated bathrooms at NASA forevermore.

The capacity crowd for the 6:40 p.m. Friday show in the big Regal Cinemas theater in Syracuse mega shopping, dining and entertainment complex Destiny USA let loose a big cheer for his outburst. It was one of several audible signs of approval as the women live well, learn wisely, and conquer the time, circumstances and social injustices the best they can.

Melfi shows us how help came from what could have been surprising places, such as the Mercury Seven astronauts themselves, who went out of their way to acknowledge the contributions of these women, and particularly John Glenn at the most crucial moments, and a judge who went against tradition to allow Jackson to attend engineering classes in a segregated school. Then again, the women earned all of this, too.

And Henson, Spencer and Monáe shine brightest as the stars. Henson goes deep and soulful as widowed mother Johnson, the woman who’s truly best with the numbers and more trustworthy than the first IBM. Spencer stays steady as a leader even when her Vaughan is refused the official supervisor role by a prissy personnel worker played by Kirsten Dunst. Monáe blazes as fiery Jackson, who overcomes the societal prejudices to become the first African American NASA engineer.

The photos of the real-life trio and explanations of what they accomplished for NASA after the period of the movie ended were a terrific clincher.

They also should make you think: How far have we come as a society as we live in 2017?

"Hidden Figures" is part of the LPL MediaBank collection.