I’ve mentioned in previous posts that my first paying job was as a boy soprano at an Episcopal church in South Orange, New Jersey. The choir at St Andrew’s was directed by a man by the name of George Blake, who was an excellent organist and a prolific composer of sacred choral and organ music.

He also helped me along the way informally, as I taught myself how to play piano by ear. Obviously, quite an important figure in my life.

Over the years since I left New Jersey, I often wondered about whatever happened to him. Before the internet, there were no really good ways to find out. Actually, I take that back. I do seem to recall contacting my old church, and they said that after they merged with another congregation in town, he left to play at another church in North Jersey. I don’t recall whether or not I ever wrote to the other church, or if they wrote back. But years went by with me wondering, but not knowing anything.

Eventually, the internet happened, and two things happened as a result. The first was that I was able to find out that he’d died in July of 1986...just about the time I met my wife. The second was that as a result of a passing reference to him in my blog, someone who was looking for information on him contacted me. He told me what he knew, and asked what I knew. I was able to give him a few leads to family members, and then he got back to me with even more information that I never knew before.

But there was one thing I was still missing. You guessed it...the obituary. 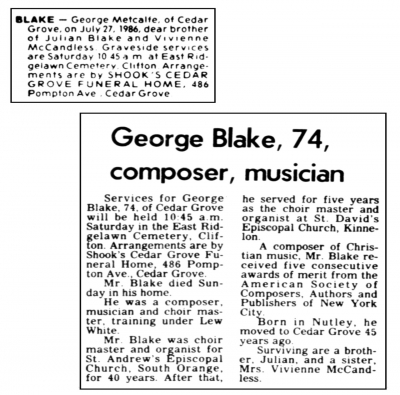 As good as the internet was, I still couldn’t easily get my hands on a copy of it. But last year, I checked out the website for the library in my hometown of East Orange, New Jersey, and found out that they’d do basic research for a “donation” of $25. That seemed reasonable, so I sent them my request, along with the requested donation, and a few weeks later I received an email with two obituaries for him in it.

But there was so much more missing. So much incredibly more missing. I understand the space limitations and cost of newspaper obituaries. And I understand that there was no internet back in 1986 to put his full story on, but even with what little they put in, they could’ve elaborated just a little more for the sake of current readers who didn’t catch all the references.

One example is how it mentioned that he was a student of Lew White. That meant nothing to me when I read the obituary last year, and I’m sure would’ve meant nothing to me had I read it back in 1986. But a little digging told me that Lew White was a big deal theater and radio organist in New York City. Perhaps the name might have been familiar to my parents and grandparents, but it meant nothing to me.

It also didn’t mention how he started playing organ at the local theater in Nutley, New Jersey at age 14, quickly became one of the top theater organists in New York, and then, seeing the writing on the wall when talkies came, left that to become not only a church organist, but also the school organist at a local high school.

As I said before, I understand that it wasn’t practical to include all of these details in the newspaper obituary of the day, but you’re not limited by that anymore. In addition to online obituaries, many people also have full-page obituaries printed out and given out at the funeral service. This is where the person’s full story can be told, and this is the kind of thing that family genealogists drool over!

So what should you include in an obituary that you write for yourself or someone else? I’ll give you an example of what mine might look like next time.