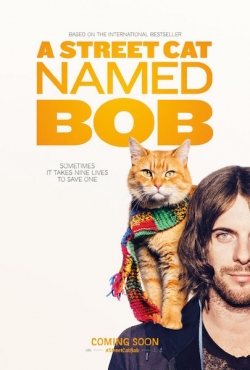 You can’t help rooting for James to turn his life around for good.

And for Bob to come out OK, too.

Their lives become entwined, these two, for better or for worse, in the true tale A Street Cat Named Bob.

It’s a little movie that could make the world feel better.

James is a street busker battling homelessness, estrangement from his father and longstanding drug addiction when we step into his life.

The young man really, really wants to get better. He’s sticking to the British program the best he can, and has his case worker on his side when a small flat opens up. She gets him in. A ginger cat works its way through the open window and, slowly but surely, into his heart and life.

Bob is one smart cat. James is one diligent dude on the rebound.

Together, they stare down man-made mountains and feline-level mouse holes.

Even this dutiful dog lover spent the 102 minutes watching the DVD chuckling out loud and cheering within.

Be sure to stick around for the clips of the real-life Bowen and Bob that sweeten the end credits, too.

'A Street Cat Named Bob' is part of the LPL's MediaBank collection.