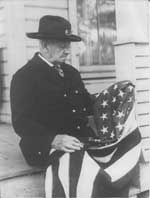 Download and enjoy this walking tour, which leads listeners through Liverpool Cemetery stopping at and learning about Civil War veterans who rest in the cemetery. The veterans discussed in this recording served in battles from Bull Run to Appomattox Courthouse, as well as all major battles in between. They served in infantry regiments, light and heavy artillery regiments and cavalry brigades. Some of these men were POWs, some were wounded in action, and others gave their lives while serving in the war to make others free.

In conjunction with this tour, the American Legion replaced many of the headstones that mark the resting place of Civil War veterans; headstones that over the years had either been damaged or became unreadable due to wear and tear.

This project is a collaborative effort between the Liverpool Public Library, the Liverpool Historian's Office, and the American Legion. Released in 2011, this tour is led by James Keib.

You may download or stream the tour on your apple or android phone. To stream simply click on the link and the tour will start. To download the walking tour file for playback on your phone, hold the link and and then select "download" (the file CemeteryTourEdit.mp3 will be downloaded to your phone).