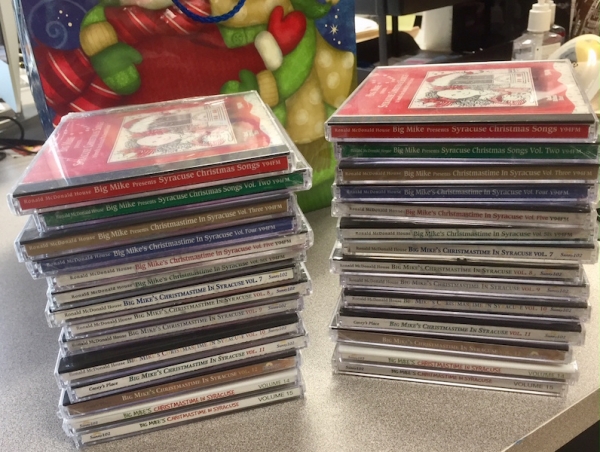 A present from Big Mike Fiss to the LPL local music-loving community.

Back in the 1980s, somebody suggested to Big Mike Fiss that he turn one of his annual Christmas Party radio show broadcasts into a holiday recording so local music lovers could appreciate the songs performed by musicians who dropped by whenever they wanted to drop it into their player.

“The broadcast itself is fun to do,” the veteran morning show host says during a recent lunch conversation, “but listening to it over and over again it loses something.

“But bringing musicians into the studio and working with them, that’s different,” he says.

And thus in 1995, “Big Mike presents … Syracuse Christmas Songs to benefit the Ronald McDonald House” was born. The CD included 15 selections, spanning from the Phoenix High School Chorus on cut No. 1 with “Carol of the Bells” to The Trash Site Blues Band closing out with “Christmas Time in Syracuse.”

A Message from Big Mike on the back cover said, in part: “In this collection, you’ll find some old favorites and a few new tunes all recorded by great musicians who live in the Syracuse area. You’ll hear a real variety of rock, folk, gospel, jazz and pop from a musical community that reflects the larger community we live in … a community that comes together to help a neighbor in need and with open arms welcomes those who have just arrived. It’s the good people of Central New York that make living here worthwhile and why many who have left return home.”

Big Mike returned to produce this project for 15 years. At first, all the proceeds went to Ronald McDonald House. For Volume 11, in 2005, the charity switched to Casey’s Place.

The first two years, he also produced a cassette tape version to accompany the CD. That format lost its luster. Then, in 2009, Big Mike knew that compact discs were falling in popularity in favor of downloading.

He ended the series with a Greatest Hits collection on CD.

“It seems like it was just yesterday,” he says.

He says the songs continue to get requests at the radio station come holiday time.

And so he’s donated to the LPL two complete series of the holiday CDs for the Local Music collection. Patrons can check them out with their library card.

“It’s really a slice of about 20 years of local pop music culture, in a way,” he says. ”It represents the great singers, choruses, bands, people making music in our area for 20 years. Many of these artists are well known, and continuing to make make music. And some of them recorded one song, and that’s the song on the CD.”

The donation has the feel of a legacy for Fiss, too. 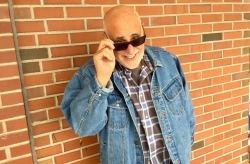 Big Mike Fiss, cool at any time or temperature.

On Wednesday morning, Nov. 15, he told his audience at SUNNY 102 that he’s retiring from the business. His last show will be the morning before Thanksgiving, Wednesday, Nov. 22, 2017.

His statement displayed his usual spirit, humor and good will:

"A while ago I decided this would be my last year doing morning radio. Wow, it's been 40 years! Amazing to think I've actually made a good living announcing the time, temperature and having fun! I have many great memories, so the decision to retire comes with mixed emotions. No doubt I will miss the on-air laughs with co-workers, guests and especially listeners. I am grateful to all. With no long goodbye, my last morning show comes up in a week on Wednesday before Thanksgiving. I sure have a lot to be thankful for. I love the people of Central New York and my plan is to do more as a community volunteer, and also sleep in a little later! I have been very fortunate to have had the best radio career I could have imagined, culminating in my 17th year at Galaxy Communications, a rare locally owned broadcast company, and I will always be proud to have been part of Galaxy's growth. Above all, I thank my wife Willie for putting up with me for all these years. She now has the burden of being my entire audience, as every morning over coffee I will tell her the time, temperature and try to be funny. And to the many who tuned in over the years:  A big thank you for listening!"

Look for availability of Big Mike Christmastime in Syracuse CDs in the LPL catalog.