Home » Blog » Feel the Soap in Julianne Moore's 'Bel Canto,' But Who Gets Out of These Things Cleanly?

Feel the Soap in Julianne Moore's 'Bel Canto,' But Who Gets Out of These Things Cleanly?

by Mark Bialczak | 23 months ago 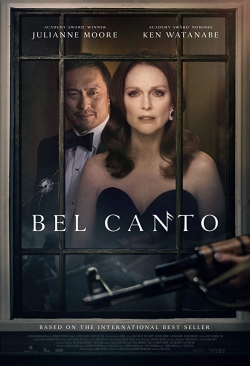 Picture a hostage situation where everybody gets along inside the gates.

That’s what unfolds during the 100 minutes of Bel Canto, the political thriller/musical (you betcha!) directed and co-written by Paul Weitz with script help by Anthony Weintraub in the adaptation from the novel from Ann Patchett. Patchett herself based her 2001 bestselling novel on the real-life 1996 uprising in Peru.

So here we have a coup in an unnamed South American country, taking place in the home of the Vice President. World famous singer Roxanne Coss has been hired to entertain, and the American means business.

Alas, the uniformed dissidents crash the party and send all the women out except their most worthy chip.

Played by drama-filled Julianne Moore, who knows scenes like this well from her early soap opera days, the singer works the room hard from all sides of the equation as the days, weeks, months wind down.

Ken Watanabe solidly plays the VP, who does his best as the gun-holders work with their frustrations that his boss didn’t show up at this party. Sebastian Koch has peace-keeping on his mind as the negotiator sent in every now and again by an international do-good organization.

The hard-working translator is a popular person as some speak Japanese and others Spanish. Moviegoers are treated to English subtitles, but only sometimes. Curious.

Tensions rise, yes, because everybody begins to suspect that some folks are not going to get what they want as the clock just ticks. Ticks. Ticks. 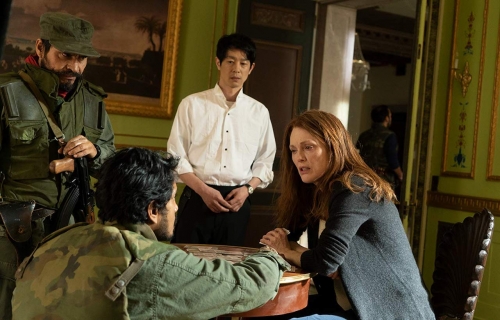 Not to mention that, wow, does Coss – voiced by world-class soprano Renee Fleming – sing so well. That gets everybody's attention.

Yet these things rarely turn out well.