by Mark Bialczak | 10 months ago

They got together in the band Dave Hanlon’s Cookbook in 1983. Two of their three CDs together won Syracuse Area Music Award trophies. Even though Hanlon had returned to the Funky Jazz Band in 2016 and thereafter branched off to play with the Diana Jacobs Band and the Dave Hanlon Trio, when the roots for the Syracuse Soul Music Series began to form in September 2021, programmer Russ Tarby gave a call to Hanlon in search of a number to find Andrews.

After her chat with Tarby, Andrews called Hanlon and asked if he’d like to play drums.

“I was elated,” Andrews said. “To work with Dave, Jimmy, Lee and Ed again is exciting.”

At 2 p.m. Sunday, April 24, in the Carman Community Room, Andrews, Hanlon and friends from Cookbook will reunited for their first show together since October 2017. They’ll be joined by Lee Tiffault on guitar, James Spivey on bass and Ed Vivienzo on keyboards. 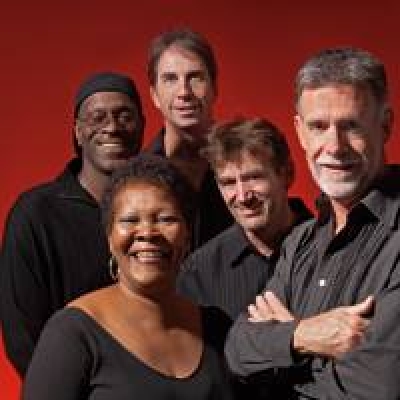 Hanlon was inducted into the SAMMYs Hall of Fame in 2005. The drummer, who will turn 75 this year, said his favorite memories are many after 60-plus years of performing.

“Early on, it always made me happy to see them in the audience, to appreciate their endless support of my drumming,” Hanlon said. “My dad was a drummer in a marching band when he was younger.

“I got to play two drum clinics with world renown drummer Louis Bellson, in Syracuse and Los Angeles. Life-changing experiences! Being inducted into both Syracuse and Rochester Music Hall of Fames. Winning SAMMYs. Drumming on 50-plus video/recording sessions of Studio Jams and Lest We Forget musician tributes produced by Tom Emmi in Philadelphia and still scheduling more. Finally, the amazing experiences of playing with wonderful musicians and good friends throughout these years, and the support the public has given us, has brought me great joy and wonderful memories,” he said.

Get ready for a show that will bring back memories of Cookbook at its best, he said.

“Seeing and hearing Ava Andrews do her thing with Cookbook, playing some soul hits from our songbook of years past, it will be fun and bring back a lot of memories to those who used to follow us,” Hanlon said, “having the opportunity to make music with these gifted musicians and good friends again, and seeing some familiar faces and meet some new folks and see the joy music brings musicians and audience alike.”
After 2017, Andrews took some time to care for her mother, who passed away last October.

“She and I would always have a song to sing. We went back to my roots, singing at (Tucker Missionary Baptist) church. She also participated in the Syracuse Opera Christmas show.

She expects to feel a familiar groove to hit her Sunday.

“The love of music, creativity and talents of the band,” Andrews said. “I always felt and acted like the big sister, dealing with four to five brothers.”

This project is made possible with funds from the Statewide Community Regrants Program, a regrant program of the New York State Council on the Arts with the support of the Office of the Governor and the New York State Legislature and administered by CNY Arts.

Posted in At the LPL; Tagged Syracuse Soul Music Series;