Feel the Pinnings on an Unlikely Friendship in 'Green Book'

by Mark Bialczak | 23 months ago 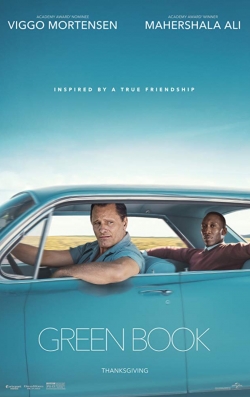 At the start of Green Book, we see Tony “Lip” Vallelonga operating through famed Manhattan nightclub The Copa as if he owned the joint. Lip uses his reputation, guile and, yes, fists to keep order and his vision of right on a busy night so the headliner on stage, most patrons in the seats and, of course, the owner remain comfortable.

Then the news comes down that The Copa will close for two months for renovations.

The Lip is a working class man, a payday-to-payday soul in a Bronx walk-up with a wife and two growing boys to feed.

The extended family gathers to protect his wife because two workmen of color are repairing something in the kitchen and he’s still sleeping in the bedroom.

But there are plenty of twists of life to come in this true tale directed by Peter Farrelly (yes, one half of the brother team that gave the world the slapstick of There’s Something About Maryand Dumb and Dumber) from the screenplay he wrote with Nick Vallelonga and Brian Currie.

Tony gets a lead for a job driving a doctor, he tells his wife. When he shows up, he’s directed to a huge apartment above Carnegie Hall, and the doctor turns out to be Don Shirley, the piano virtuoso who wants a man to take the wheel of his car and control of many aspects of his life for a two-month tour that will wind through the south.

After some negotiations including a call to Tony’s wife for approval, a contract is reached.

Yes, the talented man Tony will tag “Doc” is a dignified African American. 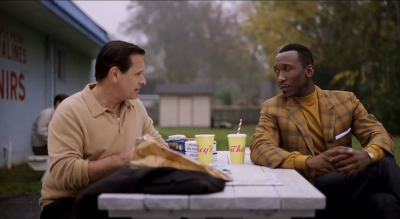 Mahershala Ali as the world-wise pianist (right) and Viggo Mortensen as the street-wise driver (left) are individually splendid and collectively stupendous, building first an uneasy peace and, little by little, a solid foundation of friendship.

The Italian sees what the African American must endure from pompous white folks in the privileged places he must perform and the regular stops of life he must schedule from that Green Book handed him from the record company officials. I right now did not know that African Americans of that day had a published book of rated motels and restaurants they were allowed to visit. Tony back then ascertains how truly seedy they turned out to be.

The African American in turn acknowledges what the Italian sheds from his past by keeping an open mind and heart.

They sit at roadside tables sharing culinary customs and letter-writing to Tony’s wife back home, played back in the Big Apple with a wise gleam by Linda Cardellini.