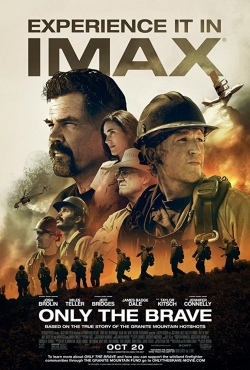 Only the Brave was ripped from the news. So anybody who followed the course of the Yarnell Fire of 2013 or the GQ story No Exit by Sean Flynn from which this screenplay by Ken Nolan and Eric Warren Singer was fashioned would know what’s to come.

The drama of that story, tight chemistry in the cast directed by Joseph Kosinski and eye-catching power of man vs. nature’s wrath makes it impossible not to get choked up when that hot fire catches them.

We meet this crew led by Eric Marsh (played tough and rough with a well-hidden sweet side by Josh Brolin) as it’s still playing second-fiddle to the big federal units who get the main jobs. No local crew has ever earned the prestigious top level of Hotshot, we learn, though this Arizona unit yearns to qualify.

The long haul of clean-up and ditch-digging causes some attrition, and one of the two newbies is a very-recently-former druggie battling his demons and a skeptical crew.

Wouldn’t you know it but a hardened townie, played with go-to-gristle by Jeff Bridges, calls in a favor to get them that evaluation session just then.

This all allows us to see them grow together, as well as their families forming a big bond, too, as they become Hotshots and face the stress and emotions that level of firefighting entails. 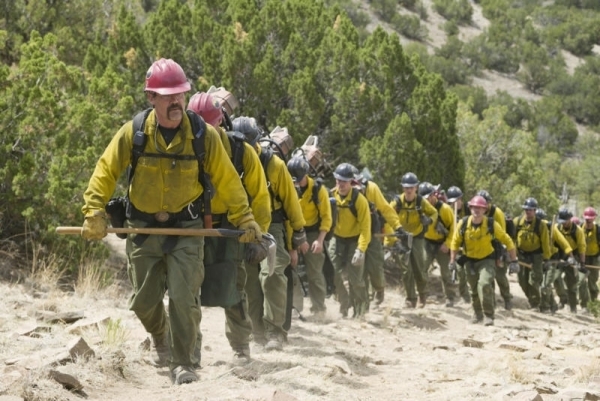 Miles Teller as the wild newcomer working to regain control of his life and Jennifer Connelly as the crew leader’s very strong wife left to make the most of theirs turn in the best two performances of the film.

The reactions when that fire takes its turn will rock your world, and make you worry all over again about the wildfires we always get in the west.

Posted in Film; Tagged Newly Released Movies, Only the Brave;